Inflation: Can only be minted by PoW-mining.

Price: You can find the BSOV price at the “Buy & Sell BSOV“-page 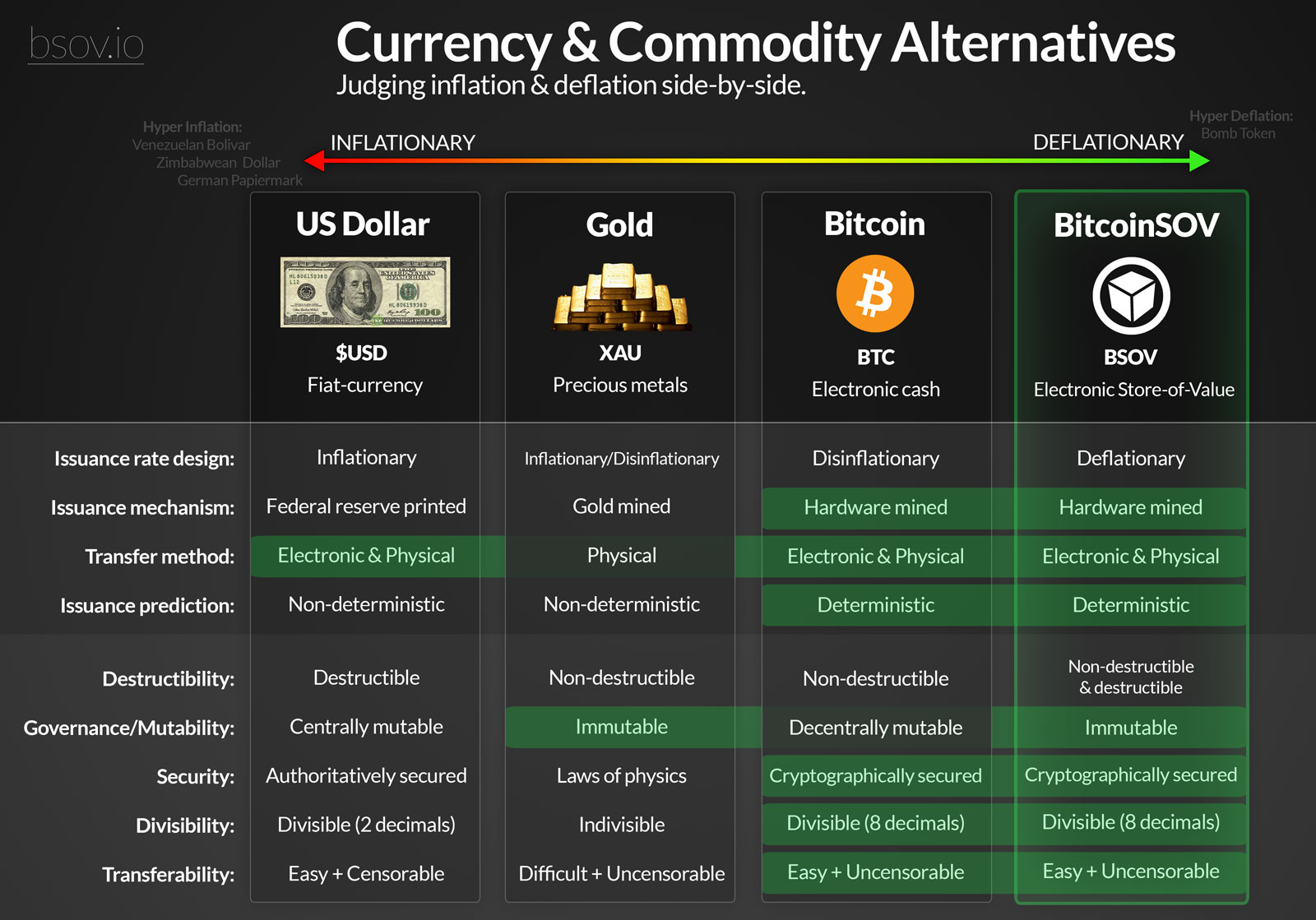 Who created BitcoinSOV, and when?

The 17th of June 2019, an anonymous person with the pseudonym “Mundo” created the BitcoinSOV (BSOV) smart-contract with this transaction. “Mundo” is a spanish word which means “World”.

Where did the idea come from?

The main idea of creating a truly decentralized deflationary token came from the hyper inflation crisis seen in many parts of the world, ex. Venezuela, where centralized government authorities produced extreme amounts of their local valuta. Hyper inflation made the value of Venezuela’s currency drop down to extreme levels, until the paper it was printed on was worth more than the currency itself.

The inspiration and the code of BitcoinSOV is a unique combination of properties from two different cryptocurrencies. In January 2019, Bomb Token was created as the “World’s first self-destructing currency”. BOMB was airdropped for free to token holders. The mining-aspect of BSOV was copied from 0xBTC which was made in February 2018.

What is BitcoinSOV (BSOV) – Technically?

BSOV is a token, a smart-contract built on the Ethereum (ETH) blockchain. BSOV fulfills the ERC20 and the ERC918 token standards, which makes it both mineable by proof-of-work (PoW) and interoperable with ERC20-enabled wallets. The deflationary mechanism is nearly the only technical difference between BTC and BSOV, except that BSOV has no consensus mechanism. The BSOV smart-contract is immutable and secured by the Ethereum (ETH) blockchain, and therefore is incredibly resistant against 51% attacks compared to other mineable cryptocurrencies.

The name “BitcoinSOV” was chosen because the supply distribution model is identical to the one of Bitcoin (BTC), and because the Bitcoin-name is the most familiar name to the mainstream community. It may be easier to adopt something you already are familiar with.

Technically, BSOV is almost just like Bitcoin, but deflationary by design, making it designed to be held rather than transacted, therefore the name “SOV”. The name “SOV” stands for “Store-of-Value” because the community behind BSOV believes that the deflationary mechanism makes BSOV more suitable as a longterm store-of-value.

In total 4 separate individuals are involved in keeping this website up. The bsov.io server is hosted by a community member, and the content is edited & written by another community member. The bsov.io domain is owned by yet another person. The old domain “btcsov.com” domain + e-mails are owned by Mundo, and have earlier been used to communicate with data aggregator sites like Coingecko, CMC and Etherscan.

Anyone is free to create their own website regarding BitcoinSOV, since the idea & concept of BSOV is 100% owned by the community.